100 Years Ago When Cider Ruled the Nation

AT ONE MINUTE AFTER MIDNIGHT on July 1, 1919, the dream of “dry” reformers became a reality when the Wartime Prohibition Act went into effect. Passed to conserve America’s food, grain, and fuel during World War I, the new law made the manufacture and sale of “intoxicating liquor” a crime against the United States.

Patriotism and war frenzy was at an all-time high when Wartime Prohibition was first introduced in April 1918 as a rider to an emergency agricultural appropriation bill. Known as the Food Production Stimulation bill, it came on the heels of a full nationwide Prohibition bill banning alcohol, which had already been passed by both houses of the Congress in December 1917, and was waiting for ratification by 36 states.

Attached to the bill was the “Jones Rider” which banned “beer, wine or other intoxicating malt or vinous liquor for beverage purposes”. Thinly disguised as a contribution to the war effort, the rider was in actuality the work of the Temperance movement, backed by the powerful Anti-Saloon League, who took advantage of the war hysteria to force their moral agenda on the American population. Their ultimate goal was to get a nationwide “dry” law, in any form, onto the books with the hope that once enacted it would be difficult to overturn.

The wartime ban, however, created more controversy and problems then it offered solutions. For one, by the time the law went into effect, the war had been over for more than six months. For another, it never clearly defined the word “intoxicating.” A later ruling declared that any liquor in excess of more than one half of one percent alcohol in volume was “intoxicating”, and therefore illegal. And, by strict interpretation, possession of liquor was never banned—only the manufacture and sale of liquor was prohibited. Further interpretation revealed that hard cider was neither a “malt or vinous liquor,” so fruit juices, such as cider, were outside the reach of Wartime Prohibition. 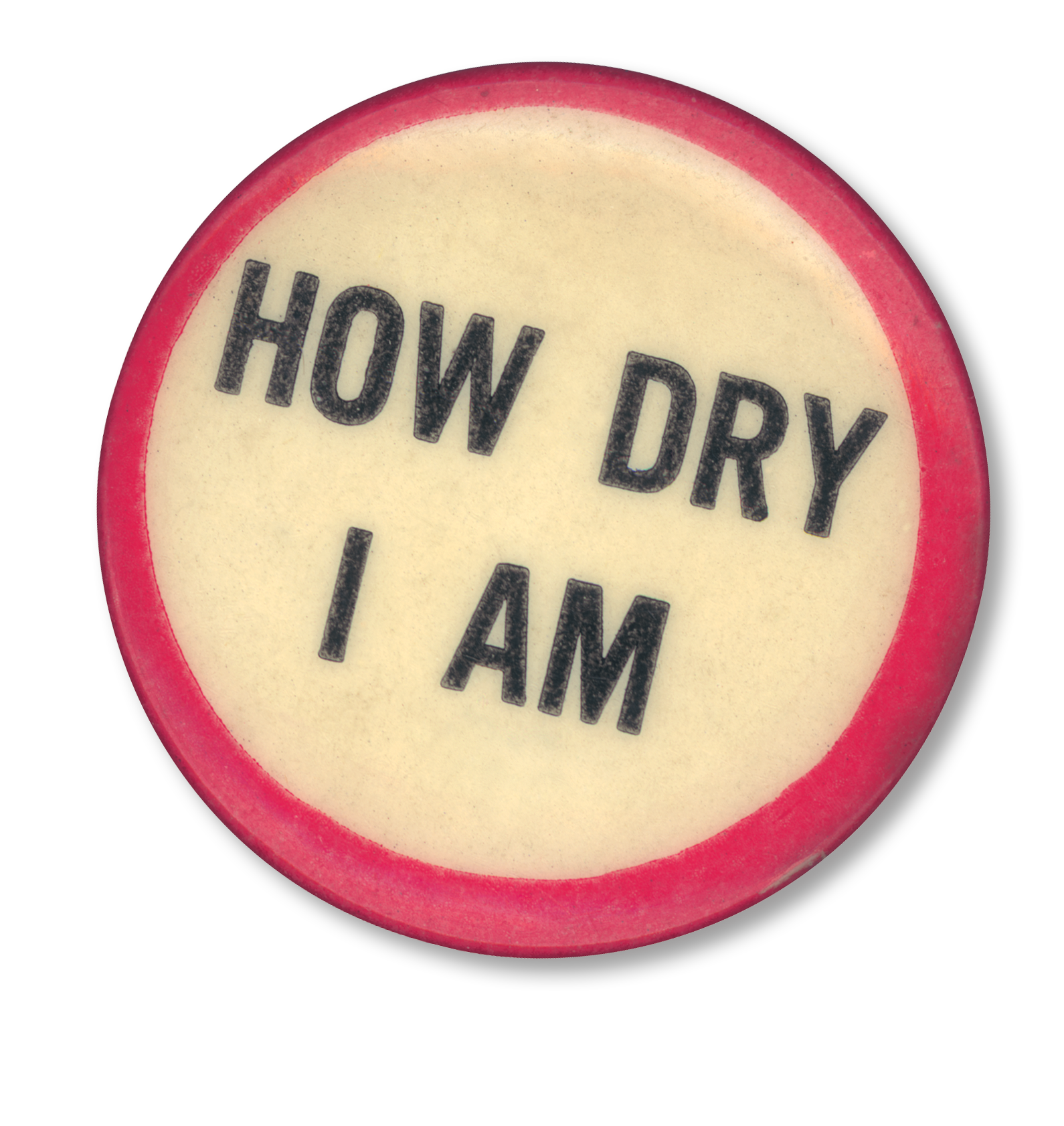 It was common knowledge that farmers and the rural population were strong supporters of the Prohibition crusade, so when legislators framed the law, they took great care to prevent any infringement on the drinking habits of their farmer constituents back home. Fearing that any prohibition law would lose the farmers backing, it was their intent to interfere as little as possible with the generally recognized right of farmers to manufacture their beloved hard cider for home use. Therefore, the manufacture and sale of pure apple cider, fermented or not, was permissible under Wartime Prohibition regulations. Cider could be sold without regard to alcohol content, though technically nothing could be added to raise the percentage of alcohol.

Resistance to the dry experiment soon began mounting in the big cities. For the most part, the urban population ignored the dry mandate and city dwellers continued to drink openly throughout Wartime Prohibition. New York had difficulty dealing with the ban, as 92 percent of its population was previously living in “wet” [anti-prohibitionist] territory. By comparison, in the rest of the country nearly 60 percent of the population was under some form of local or state prohibition before Wartime Prohibition went into effect.

As the “wets” continued their resistance, filing endless lawsuits in their fight against Prohibition, the Treasury Department was eventually forced to admit, in an announcement in November 1919, that cider was indeed not “a vinous liquor” as determined by the Jones Rider, and therefore not subject to the ban on alcohol.

Cider, whether hard or sweet, could be sold without regard to its alcohol content, or at least until January 16, 1920, when constitutional Prohibition, finally ratified as the Eighteenth Amendment, would go into effect and replace Wartime Prohibition. Almost immediately, cider supplies in many communities dwindled, and cider prices leapt to more than several dollars a gallon. Apple prices also rose with reports of growing shortages, as farmers and speculators began hoarding apples for cider making before the January deadline. In the cities, many hotels, restaurants, and bars substituted hard cider for the usual spirits to celebrate the 1920 New Year, which would have otherwise been dry. In this new era, where beer, wine, and liquor were illegal, cider now reigned supreme.

MORE THAN A RURAL FAVORITE 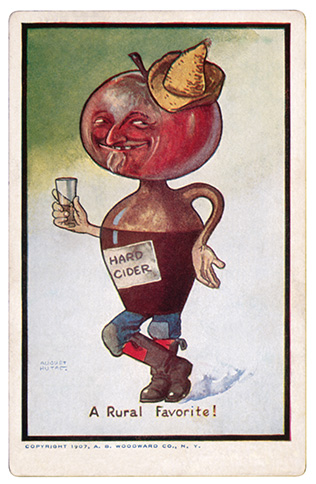 Barely six months into national Prohibition, the newly formed Bureau of Prohibition could no longer avoid the cider dilemma. In July 1920, the Bureau made public a ruling that settled any doubt on the legality of hard cider, virtually lifting the ban on cider, fruit juices and “non-intoxicating” beverages.

Citing the Volstead Act, the law enacted to enforce the Eighteenth Amendment, the Bureau pointed out that Section 29 of the Act specifically exempted cider and other “fruit juices” that might acquire an alcoholic content through the natural process of fermentation. These beverages were not subject to the legal limit of “one half of one percent” alcohol. The Bureau ruled that these beverages were not “intoxicating”, but rather “intoxicating in fact”—an ambiguous, contradictory term that implied that if wine, cider, or other fermented fruit juices were made for use exclusively in the home, the burden was upon the government to prove that they were “intoxicating in fact”.

There were various regulations attached to the ruling. Items that could raise the sugar content and percentage of alcohol in the final product—like dried fruits, dandelions, rhubarb, and elderberry blossoms—technically could not be “added” to the mixture. It was also a violation to make wine from flowers and herbs, but not from fresh fruits. Apples, peaches, pears, strawberries, cherries, and, of course, grapes, were permitted even though the fermented results could reach as high as 15 to 20 percent.

What was intended as a loophole to enable the farmers to escape the drastic provisions of Prohibition had turned into an equal protection for city dwellers, who by law were now fully protected to make“non-intoxicating ciders and fruit juices.” And if cider, wine, and other fruit juices were protected, why not beer? This question was raised time and again, and as the years went by, challenges to Prohibition laws, both public and private, increased.

Among the more notable challengers was Congressman John Philip Hill from Baltimore, MD, who took on the authorities and pointed out the discrepancies between homemade cider and beer, and the ability of farmers to make and drink hard cider, while the city dweller was denied even 2.75% beer under the same law.

In 1924, Hill hosted a high-profile party at his backyard farm, and as a publicity stunt invited the commissioner of Prohibition to sample his homemade cider and wine. Hill, of course, was promptly arrested and tried on six counts of violating the Volstead Act. The publicly covered trial only lasted two days, though it took 20 hours of deliberation for the jury to find Hill not guilty on all counts.

Just a year later, New York’s own Congressman Fiorello LaGuardia argued the same point, and invited reporters and photographers to his Washington, DC, office where he mixed a “near beer” (the legal no-alcohol beer) with a bottle of malt tonic, took a sip of the 2% “beer” and declared that the alcoholic beverage was perfectly legal under the definition of the Volstead Act. This and many other stunts were covered in the newspapers, leading to a slow erosion of the public’s already deteriorating views on Prohibition.

Wartime Prohibition was meant to be a temporary situation—it lasted a little more than six months—but it was viewed as an experiment to prepare the public for lifelong constitutional Prohibition. Homemade cider remained legal throughout the long years of National Prohibition, and although public debates and legal challenges continued to arise, they were always rejected.

Despite the popularity of cider in rural America, the rest of the population couldn’t survive on fruit juices alone. Ten years into Prohibition, it was apparent that millions of Americans were manufacturing large quantities of wine and beer, as well as cider, in their homes. In fact, the amount of homemade wine produced was estimated to be more than 10 times pre-Prohibition levels. Homemade cider production was so widespread that it couldn’t be accurately measured. So much for the dry experiment.

Eventually, it was a matter of simple economics that ended the nation’s “noble experiment.” Three years into the economic depression which began with the market collapse in 1929, the potential of restoring billions of dollars to the U.S. Treasury by repealing the ban on alcohol outweighed any moral considerations or national sacrifice that might have once existed. The amendment mandating repeal of National Prohibition was ratified December 5, 1933, and went into effect immediately.