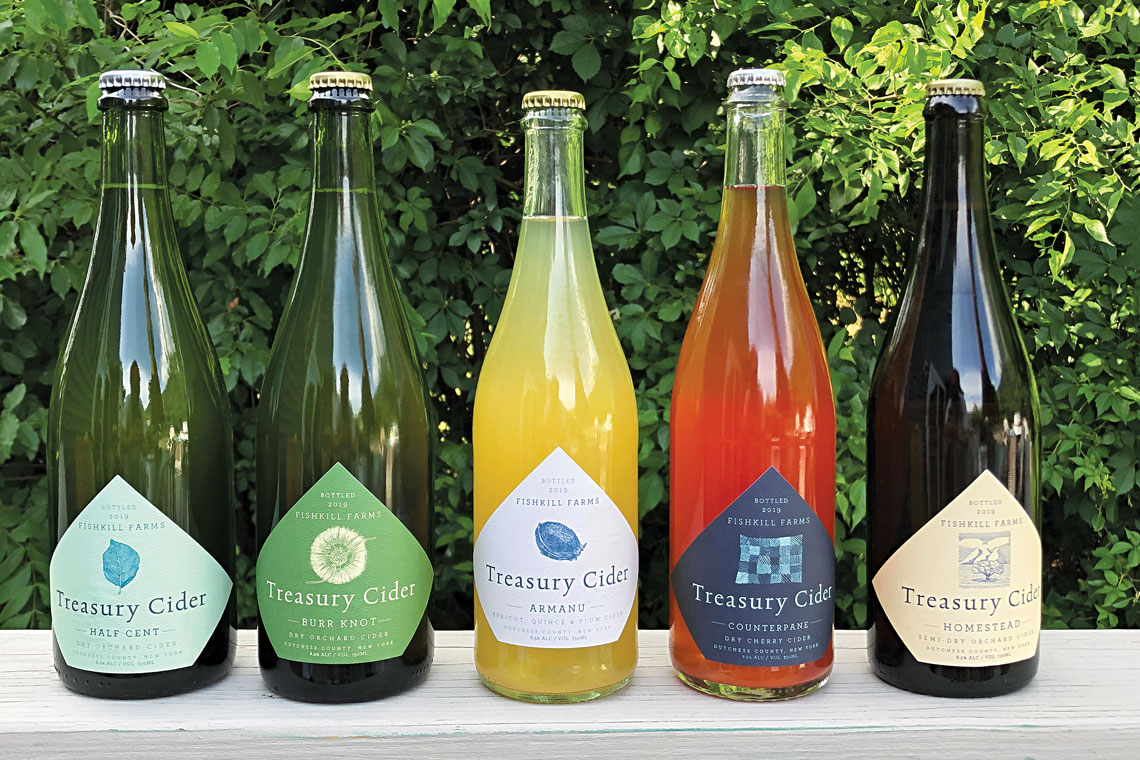 TREASURY CIDER IS A TREE-TO-BOTTLE hard cider produced by Fishkill Farms at their century-old family orchard. They use a mix of heirloom, bittersweet, and dessert apples that are cultivated, pressed, and fermented with care to produce each batch of hard cider. Every ingredient is grown or wild foraged on the farm, and fermented traditionally to produce delicate ciders akin to dry and sparkling white wines.

In 2015, after growing apples for more than 100 years, family-owned Fishkill Farms began producing hard cider called Treasury to invoke the spirit of the farm’s founder, Henry Morgenthau Jr., who served as U.S. Secretary of the Treasury under Roosevelt. It is also a nod to the historic American cider cellars which, like treasuries, served as year-round sources of comfort and vitality for the families and communities in their area.

Today, Henry’s grandson Josh Morgenthau carries on this tradition as a third generation orchardist, and the cider maker behind Treasury Cider. Starting with the belief that outstanding cider is made in the orchard, the apples used in Treasury Cider are chosen for the character they add to cider, grown with a minimum of intervention, eco-certified, and picked at peak ripeness. The unique Hudson Valley climate and rich glacial soils yield complex, site-specific flavors to their cider. After pressing through a rack and cloth press, the apples are fermented slowly at cool temperatures and aged for six to ten months before bottling. Unlike commercial cider, which is often made with under-ripe fruit and over-sweetened with sugar, Treasury Ciders are dryer and less carbonated, and pair wonderfully with a variety of foods.

Treasury’s newest releases were made with the 2019 crops. They are a mix of apples like Jonamac and Golden Delicious which grow on 50-year old trees, and newer organic plantings of heirloom and cider varieties, including Roxbury Russet, Esopus Spitzenberg, Ashmead’s Kernel, Northern Spy, and Goldrush. Homestead is a traditional semi-dry sparkling cider, as is Wild at Heart, which has foraged staghorn sumac for tartness and a light pink hue. Wiccopee, Burr Knot, Centennial, Counterpane, and an as-of-yet unnamed variety featuring peaches are dry, unfiltered ciders fermented with native yeasts, bottle conditioned in small batches and then aged 4-6 months. Wiccopee is made from a mix of 100% organic apples, producing a rustic, dry farmhouse-style cider. Burr Knot’s mix of crab apples and heirloom apples gives it spicy, complex notes; Centennial, the fullest bodied cider blends a mix of with Roxbury Russet, Ashmead’s Kernel and Golden Russet aged in stainless steel and oak to create an elegant and highly aromatic cider. Counterpane is a rosy-hued cider made by co-fermenting Fishkill Farm’s sweet and tart cherries with high-acid dessert apples. Finally, the upcoming peach variety is produced in the same manner as Counterpane, but with peaches instead of cherries.

Treasury will also debut a new release this year—cyser, a blending of the traditional cider making process with the making of mead. This still variety features the addition of local honey to Treasury’s cider, resulting in a beautiful golden color and complex flavor notes.